THE HEART OF LORKHAN – A Speculative Deconstruction of The Monomyth


I am fascinated by the story of Lorkhan. The song, Red Diamond, played by bards in Inns across Tamriel is a song as divisive as opinions of the being itself.

In order to understand the story of Lorkhan in context, though, we need to go back to the very beginning, as the wayward god plays such an integral role in creation. Come with me on this journey.

It is important, then, to know that everything began, as many stories do, with two forces at odds, two “brothers” (or, according to the Khajiit, littermates who mated, giving birth to the gods, because cats). Anu and Padomay, as they are known in the Elven tales of creation, represent the concepts of Order and Chaos respectively. I find it interesting that, unlike in most creation myths, they are represented as Order and Chaos, rather than Good and Evil.

These two forces existed in The Void, which was as empty as it sounds. Their conflict gave rise to a group of entities known as the et’Ada, or “Original Spirits. The et’Ada who were composed mostly or wholly of the stuff of Anu or Order, are known as the Magna Ge, and far less is known about them, as these are the spirits who left existence. More on this later.

The spirits who formed mostly or wholly out of Padomay’s chaos, the Daedra, are now more commonly known as the Daedric Princes, as the term Daedra now colloquially refers to the creations of the Princes themselves. Note, again, that the Daedra are spirits of Chaos, but not necessarily of Evil, although many are indisputably Evil and are indeed the primary villains of the Elder Scrolls series. I would argue, however, that the Daedric Princes can also be seen as simply performing a cosmic function, bound to play roles of antagonists to the mortal races (which, paradoxically, strengthens the mortals’ resolve, binds them together and empowers them, advancing the cause of Order).

This internal dichotomy is perhaps best showcased in microcosm by the story of the Daedric Prince of Madness, Sheogorath who is in truth Jyggalag, the Daedric Prince of Order. When Jyggalag became too powerful, he was cursed by the other Daedric Princes to become everything he despised, as Sheogorath, only regaining his former self at the end of each Era for long enough to reconquer his lands and restore Order before transforming back to Sheogorath to begin the cycle anew.

Daedra are also notable due to the fact that they did not depart creation, like the Magna Ge, but also did not participate in the creation of the world, instead choosing to create their own realms and lesser Daedra.

The final group of et’Ada, the Aedra, worshipped by most of the “civilized” and “good” races of Tamriel, were those who coalesced from elements of both Anu’s Order and Padomay’s Chaos. The Aedra are characterised by the fact that they participated in the creation of the world and mortal creatures. 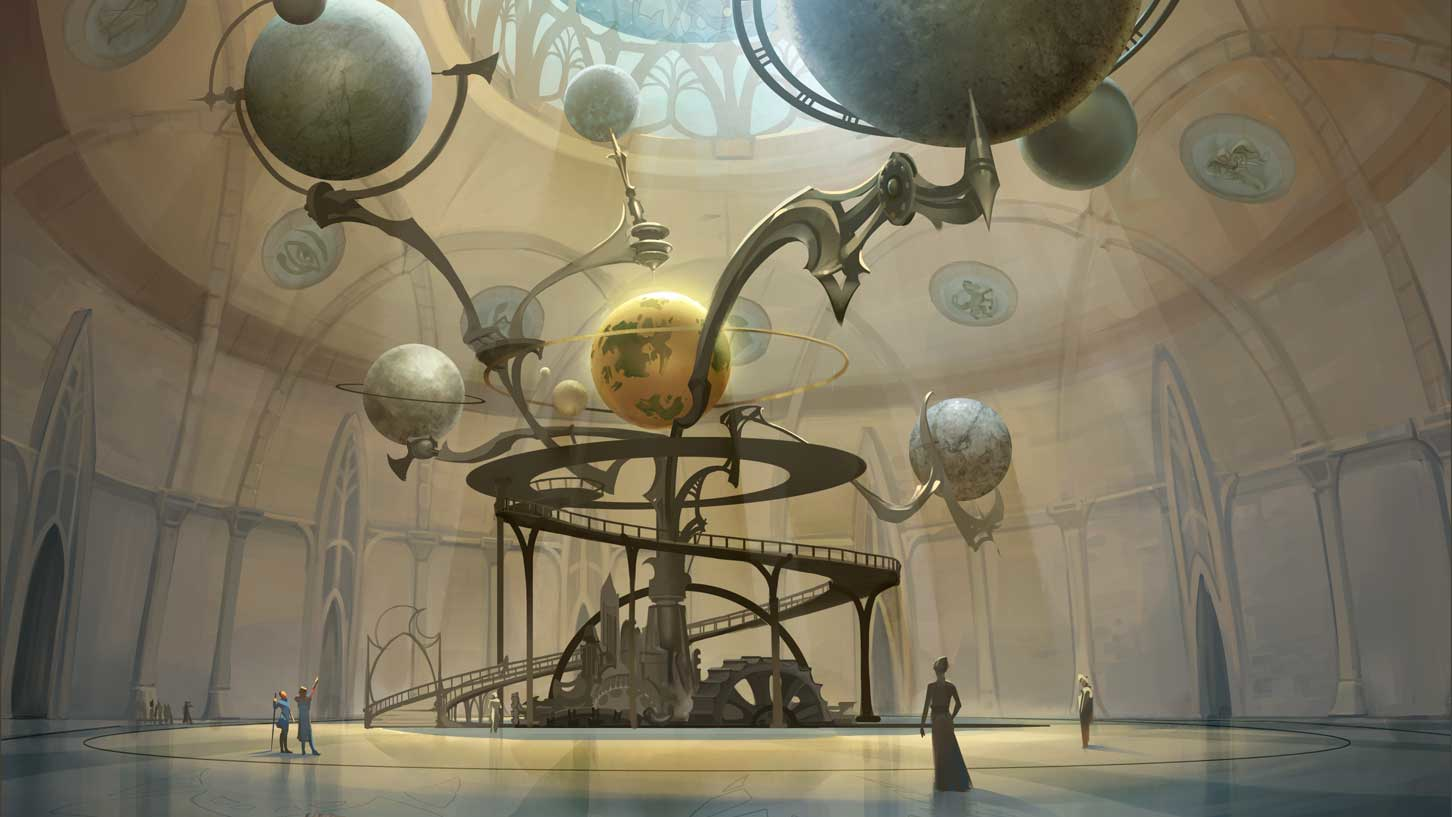 The Grey Maybe, better known as Nirn, was the playground of the et’Ada. With the coalescing of the spirit Akatosh – the First, time was born. With his presence, other spirits were able to coalesce, with a firm notion of their own past, present and future.

Once the more powerful spirits had formed, a younger spirit, born from an idea, known to the other spirits as Lorkhan – an Aldmeri word meaning Doom Drum, also came into being. And this idea was the formation of a material plane.

The means used by Lorkhan to convince the other spirits to participate in the creation of the material plane vary according to the account, but convince them he did. Although Lorkhan was the originator of the idea, Magnus, god of magic, was to be the Architect.

The process of creation was long and costly, and it greatly weakened those involved, trapping them on this new mortal plane. At the last possible moment, though, Magnus was said to have regretted his involvement in the act of creation. He fled Mundus, the realm he had designed, tearing a massive hole in the fabric of Oblivion which surrounded the space into which Mundus was being created. This hole became the sun, and the conduit through which his energy continues to bleed into existence, an energy harnessed by men and mer as magic.

Other spirits, emboldened by Magnus’ example, also chose to flee. As they had waited, though, they were weakened, and their passing left much smaller holes, which became the stars. They became known as the Magna Ge, or Children of Magnus. Like the sun, these stars allowed the light of Aetherius to enter Mundus through the veil of Oblivion which surrounds it.

Despite the growing controversy surrounding creation, eight of the great spirits chose to remain and complete their work. They gave their last power to ensure the birth of Mundus and became both the eight planets and, perhaps more importantly, the Eight Divines, forever venerated by all mortals for their sacrifice.

The weaker spirits who also sacrificed themselves in creation became the Earthbones or Ehlnofey, progenitors of mortal life. Some of the Ehlnofey became the laws of nature, while others became mortal. Those who remained together and organised retained much of their knowledge and understanding of magic and eventually, after the Sundering of Aldmeris (their first homeland) became the ancestors of the various races of Mer. The rest were fragmented and were known as the Wanders. These Wanders were weaker individually than their Aldmeri cousins, because they lost much of their understanding of magic, but became tougher and more numerous as a result, in order to survive. After many ages of wandering, they became the races of Man.

Great wars for dominance were waged between the mortals, with remnants of the most powerful et’Ada choosing sides. Auri-el, the elven version of Akatosh, led the mortals who would one day become the Aldmeri, and Lorkhan was the champion of humanity. The humans lost.

As punishment for what they perceived as Lorkhan’s betrayal, the remnants of the et’Ada captured Lorkhan and brought him to the Adamantine Tower, the First Tower, which had been created for the planning of creation, to discuss his fate. 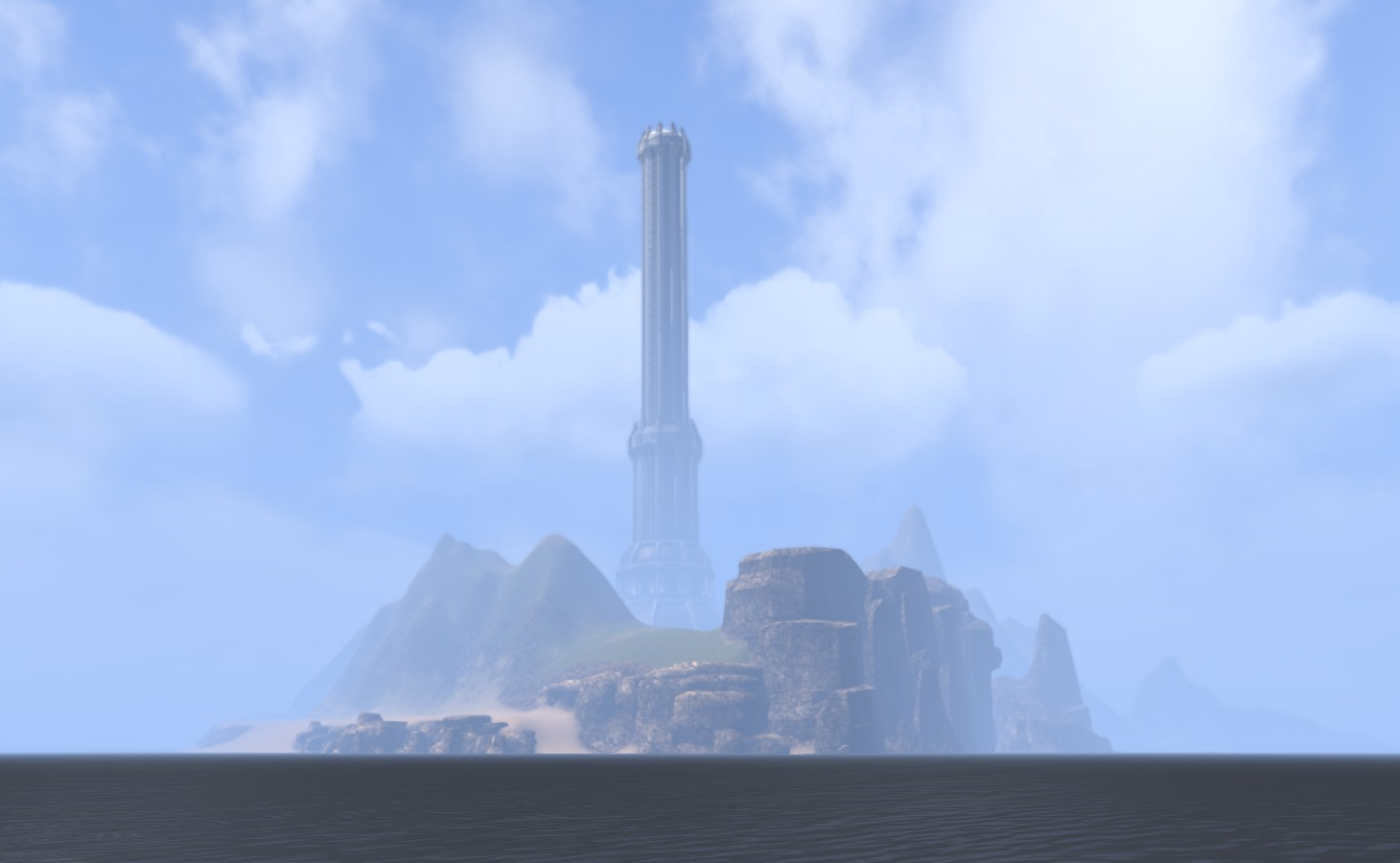 This Adamantine Tower later became the template for the other towers, including White-Gold, scattered around the world, which are said to be the pillars which support the weight of creation.

Lorkhan, meanwhile, was judged by his peers and found wanting. So Trinimac ripped out his heart, which was believed by some to be a separate entity, the manifestation of chaos, responsible for the perceived betrayal. Auri-el used his mighty bow to fire the heart across Tamriel. It landed in the ocean north of modern day Morrowind, where a great volcanic island grew up from it, creating Vvardenfell.

The two largest pieces of Lorkhan’s corpse were flung into the void, where they still float today, known by mortals are Masser and Secunda, the moons of Mundus. What remained is still the subject of great speculation.

Some believe, of course, that the old trickster died that day atop the Adamantine, but an idea is hard to kill! Others believe that the remnants of Lorkhan still wander the world to this day – perhaps in the form of a mysterious Khajiit - cursed to survey what he has wrought.

Opinions on this mysterious being are highly contradictory. Hated by the elves for his role in reducing them from their places of divinity and revered by men for his role in their “creation”, it is hard to say which is closer to the truth.

What then of Lorkhan’s motivations? Why did he initiate the creation of a material plane? What did he stand to gain, beyond the furthering of chaos which, to be fair, is his nature? I find that the why is often far more interesting than the what. Some speculate that his motives were in fact love. An intent to create an Arena (the translation of the Ehlnofex word Nirn) to test the multitude of weaker spirits and teach them. To perhaps offer them a way to one day ascend to greatness.

Although many tales have Lorkhan captured and tried for his crimes, yet others contend that he surrendered himself willingly, saddened by the carnage he had caused. Or perhaps he knew a secret that has yet to be told? Why not simply share this secret with his peers? Certainly some truths cannot be told and must be discovered for oneself.

Perhaps we will never know what Lorkhan’s true intentions were. I, for one, have a soft spot for this tragic, misunderstood figure. I would like to believe that the heart of Lorkhan was pure. And that he acted for the betterment of those around him. While he is certainly responsible for much suffering, the crucible which is Mundus has certainly acted to strengthen and teach many on their path to greatness.

THE HEART OF LORKHAN – A Speculative Deconstruction of The Monomyth

I am fascinated by the story of Lorkhan. The song, Red Diamond , played by bards in Inns across Tamriel is a song as divisive as opinions...